How OSG helped a global pharmaceutical company evaluate and prioritize potential scientific statements intended to launch an unbranded campaign to educate physicians before the launch of Drug X.

A global pharmaceutical company and its agency of record were planning to launch an unbranded campaign to shape the opioid-induced nausea and vomiting (OINV) treatment market for the later launch of Drug X and thus wanted to test potential scientific statements that would boost this campaign. Using OSG’s AI-driven big data analytics platform, we conducted research in the United States to prioritize messages designed to launch a campaign that educates physicians about OINV and drives them to seek more information.

Check out more of our case studies: 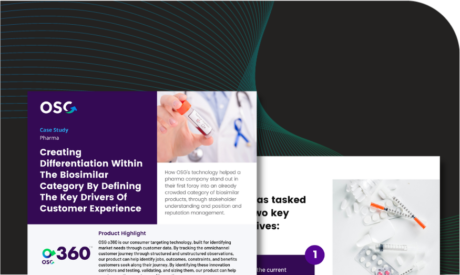 How OSG’s technology helped a pharma company stand out in their first foray into an already crowded category of biosimilar products, through stakeholder understanding and position and reputation management. How OSG helped a global specialist in energy management and automation build a measurement infrastructure to better engage with customers to impact acquisition and purchases.

Read more
We use cookies on our website to give you the most relevant experience by remembering your preferences and repeat visits. By clicking “Accept”, you consent to the use of ALL the cookies.
Do not sell my personal information.
Cookie SettingsAccept
Manage consent

This website uses cookies to improve your experience while you navigate through the website. Out of these, the cookies that are categorized as necessary are stored on your browser as they are essential for the working of basic functionalities of the website. We also use third-party cookies that help us analyze and understand how you use this website. These cookies will be stored in your browser only with your consent. You also have the option to opt-out of these cookies. But opting out of some of these cookies may affect your browsing experience.
Necessary Always Enabled
Necessary cookies are absolutely essential for the website to function properly. These cookies ensure basic functionalities and security features of the website, anonymously.
Functional
Functional cookies help to perform certain functionalities like sharing the content of the website on social media platforms, collect feedbacks, and other third-party features.
Performance
Performance cookies are used to understand and analyze the key performance indexes of the website which helps in delivering a better user experience for the visitors.
Analytics
Analytical cookies are used to understand how visitors interact with the website. These cookies help provide information on metrics the number of visitors, bounce rate, traffic source, etc.
Advertisement
Advertisement cookies are used to provide visitors with relevant ads and marketing campaigns. These cookies track visitors across websites and collect information to provide customized ads.
Others
Other uncategorized cookies are those that are being analyzed and have not been classified into a category as yet.
SAVE & ACCEPT